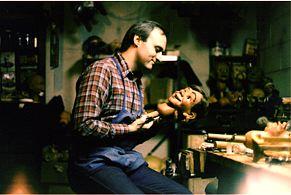 Prior to joining B&M, I was a spruce tree, outside of Summerset, New Jersey. (See me at left, being restored to my original good looks by my creator, Alan Semok, the Dummy Doctor.) Read Chip’s award-winning blog.To read some of Chip’s “Views on Life”, also called Chip Shots, click here.My first stint in marketing was as a tradeshow traffic builder at Chicago’s McCormick Place. As far as I’m concerned, McCormick can have it back. I draw the line at $16.00 hamburgers. Anyway, I proved my worth by attracting large numbers of prospects into our client’s booth. (For tradeshow services, click here.)

I quickly branched out to many other marketing and public relations activities for J. I. Case, A. O. Smith, S. C. Johnson, P&H and other companies that use initials in their names. (For a list of companies who will admit to employing me, click here.)

My gift as an attention-getting communicator has led to appearances on Good Morning America, The Today Show, CBS This Morning, CBS Evening News, Entertainment Tonight and many other national and regional television programs which obviously had dead time to fill.

A reporter once categorized me as “… a hammer with a voice, looking for someone to pound on.” This is an accurate assessment. While communicating important messages to employees, distributors or customers, I often seize the opportunity to good naturedly “pound” verbally on CEO’s, presidents, vice presidents and managers. This makes me a big hit with employees … but, lessens the chances of managers hiring me for return engagements. (Just kidding. More than 80% of those who retain my services, have had me back for additional engagements.)

Traveling with Dale, I’m frequently called on to roast politicians, celebrities, professional athletes, managers, sales people, distributors and individuals from all walks of life. For instance, I was once asked to introduce Baseball Hall of Famer, Mike Hegan, as a featured speaker. I didn’t exactly stick to the prepared introduction. When Mike reached the speaker’s platform, he looked at me and said, “Following Chip to the podium is a little like following the elephants in a parade,” … whatever that means.

Anyway, as a puppet, I’ve come a long way. My rather unique contribution to improving communications and marketing programs in corporate America was instrumental in getting Dale Brown selected as Ventriloquist of the Year, at the 15th Annual International Ventriloquist Convention. The plaque hangs in my office. (Dale may have had a hand in it, but I was responsible for winning the award.)